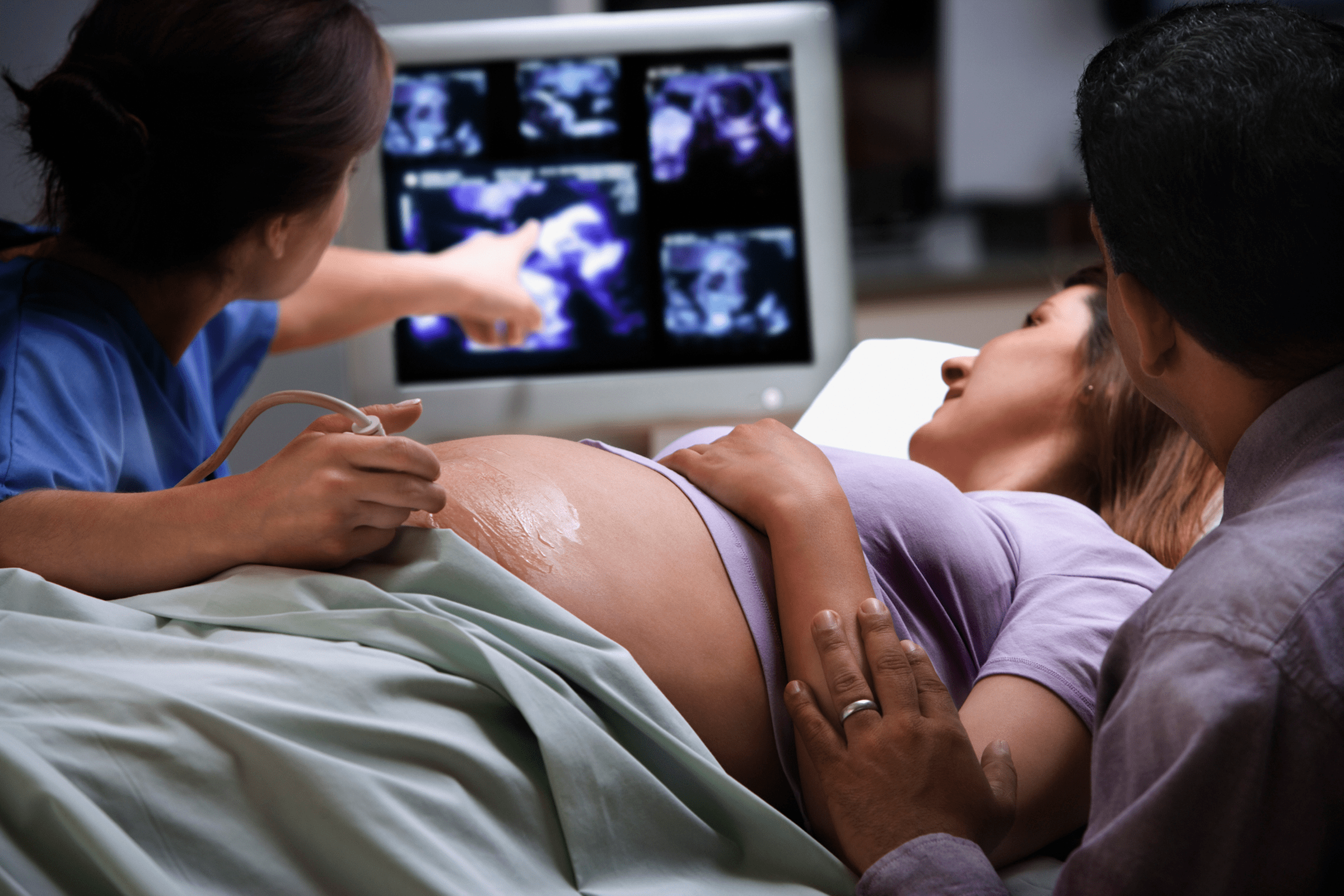 All your early pregnancy scans, tests and routine baby ultrasounds are performed personally by Miss Yu who is a fetal medicine specialist with 18 years’ extensive experience. Awarded expert accreditation from the Fetal Medicine Foundation she performs ultrasound examinations and invasive procedures including CVS and Amniocentesis.

Overview of specialist scans and tests:

Viability scans are performed at 7-11 weeks of pregnancy. Chrissie will usually scan ‘transabdominally’; through your tummy. If there is a concern about a possible ectopic pregnancy, this scan can be done at 6-7 weeks trans-vaginally. At this stage it is unlikely to see a heart beating but it is possible to confirm that the pregnancy sac is in the uterus. The scan at 7-11 weeks can show how many embryos there are, confirm the presence of a heartbeat and confirm the number of weeks of your pregnancy. This scan is also called a Dating Scan.

This is the first stage at which the fetus can be seen in greater detail. This scan confirms that there is a heartbeat, and the number of fetuses. Baby’s head, trunk, arms, legs, hands and feet can be seen and we will also look at the placenta, amniotic fluid and umbilical cord. Miss Yu will then measure the ‘nuchal fold’ or ‘nuchal translucency’ and the baby’s nose bone. The nuchal translucency is the skin at the back of the baby’s neck. In some babies with problems such as Down’s syndrome, and also in some normal babies, this can be enlarged by fluid. The nose bone can be small or absent in Down’s syndrome babies. We will need a blood sample from your arm and perform a blood test for two specific hormones. The result of this test (available from the lab within two hours) will give you specific information about your level of risk of your baby having fetal abnormalities such as Down’s syndrome. This is called the combined test for Down’s Syndrome.

A scan is not usually necessary at this stage of your pregnancy, though it may be required if you have had bleeding or been unwell. It measures baby’s head, abdomen, and leg length and locates the placenta, the amniotic fluid and assesses the umbilical cord. The measurements will be plotted on a graph for you.

At this stage you can usually discover the sex of your baby with very reliable sexing. Miss Yu will only advise you of your baby’s sex if you ask. She will also measure your baby and assess its well-being.

Miss Yu will take measurements of your baby’s head, brain, abdomen and legs and plot them on a chart. She then performs a detailed scan to check your baby’s heart, brain, spine, bowel and limbs, to detect any abnormalities. This can never completely rule out any abnormalities, but it does give very strong reassurance. She also scans the placenta, amniotic fluid and the umbilical cord. If you wish, you can find out the sex of your baby from this scan.

If your baby is at risk of premature birth, it may be useful to have a scan, using a probe in the vagina, to assess the length of the uterine cervix. This can be done at any stage from 16 weeks but is most useful if done sequentially at 17 and 21 weeks of pregnancy.

During this scan Miss Yu measures the baby’s head, abdomen and limbs, and estimate it’s weight. This gives a guide to how big your baby will be at birth. We also look at how the baby is moving, the amount of amniotic fluid, where the placenta is, as well as assessing the Doppler blood flow in the umbilical cord blood vessels.

It has been discovered that a blood sample taken from the mother at any time from early pregnancy can be analysed for cell free fetal DNA, which is essentially a marker in the mother’s blood of the DNA of the baby. The result of the simple blood test (Harmony), taken at 10 weeks or later has a sensitivity for the detection of Down’s syndrome greater than 99%, 97.4% for Edwards syndrome and 93.8% for Patau’s syndrome, with a false positive rate of less than 0.1%. This can reduce the need for invasive testing by CVS or amniocentesis. This is great news for couples because it eliminates the risk of miscarriage from invasive testing. It is important that an ultrasound scan is performed just before the blood test to confirm the pregnancy, and to check that the mother is not carrying twins or more. The Harmony test can be used to check twins with a sensitivity for the detection of Down’s syndrome greater than 95% and can now be used if the pregnancy is conceived with donated egg.

Why have the Harmony test?

This is now one of the most accurate non-invasive tests to detect the chance of a chromosomal abnormality in a pregnancy. (Positive predictive value ‘PPV’ greater than 99% for Down’s Syndrome).

For the last ten years doctors have been using the results of the Nuchal Translucency Scan to advise pregnant women and their partners on their risk of having a baby with Down’s syndrome, or other abnormalities. The Nuchal Translucency Scan looks at the skin fold on the back of the baby’s neck at about 12 weeks. This has been further refined by looking at the nose bone of the baby with an additional blood test to identify two pregnancy hormones. This is the combined test and has achieved a positive predictive value of about 84%. Women with a high risk have an option to proceed to chorion villous sampling (CVS) or amniocentesis. These are invasive tests that carry a miscarriage risk of about 1:100. This is changing now the Harmony blood test has become available.

Who needs a Harmony Test?

Anyone who wants extra reassurance about the normality of the pregnancy can have the test. Women who may need it are those who are anxious about their baby having a chromosomal abnormality such as Down’s, Edwards or Patau’s syndrome, older women (particularly over 40 years) and those who have already had a chromosomally abnormal pregnancy often opt for the test. Those who are at particular risk of miscarriage should they have an amniocentesis or chorionic villous sample also find the test very attractive as it avoids an invasive procedure. It is helpful for those who have had a previous sex chromosome abnormality such as Turners syndrome.

How long does it take to get a result?

The result is available within 3-10 working days, with a normal turnaround time of 5 working days. There is a 2% chance that there will be no result obtained. There are a variety of reasons for this. This is not a positive or negative test: it is an unsuccessful test. An offer of a repeat test is made free of charge. This is usually successful. In rare circumstances the result can take longer than 7 days. We understand it can be a stressful time waiting for results and we will endeavour to communicate any delays to our patients as soon as we receive information from the laboratory.

How is the result expressed?

The result is expressed as a probability. It is a screening test and not a diagnostic test. A result form of a low risk test is shown below. A low risk test result gives a risk of a chromosomal problem of less than 1:10000. A high risk result gives a risk of greater than 99%. A high risk result does not confirm that the baby has the chromosome abnormality. An amniocentesis or chorionic villous sampling is necessary to give a diagnosis. The couple are counselled about this.

What happens after the test?

Depending on how many weeks pregnant you are, you will still have the opportunity to have a 12 week scan privately or with the NHS. The focus of the 12 week scan will change as you will already have the result of the Down’s syndrome test, so the 12 week scan will look at the baby in detail for structural abnormalities (these may exist without a chromosomal abnormality). You will still have the opportunity to have the later scans, such as the 20 weeks scan, as before. If the Harmony test is low risk then it is important that the person conducting the 12 week scan is aware of this. If the test is high risk then you should return to see Miss Yu or an NHS unit for further counselling.

Are there some abnormalities the Harmony test will not detect?

Yes. Structural abnormalities such as Spina Bifida, heart defects and a poorly growing baby will only be seen on scans and often not until later scans. These scans should still be undertaken.

After you have had the results of this combined test, you can make an informed choice about whether to have a CVS (Chorionic Villous Sample) at 12 weeks, or an amniocentesis at 16 weeks. These tests give definitive information about whether there are any abnormalities. These tests are ‘invasive procedures’ and carry an added risk of miscarriage of 1%. This means that 1 in every 100 women who have these tests will have a miscarriage as a result of having the test. There has been an important new development of a blood test to reduce the need for chorionic villous sample or amniocentesis (CVS, Amnio) in most cases. This is called the Non-Invasive Prenatal Diagnosis (The Harmony blood test).